Today, I’ll speak about… saves! So this post won’t have a lot of screenshots, mainly boring text 😉 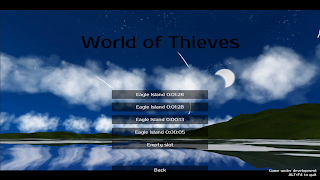 Not very impressive, but here is the save menu!

As I want to be able to build up a complete version of my game as early as possible (even if it’s only on 1 level), I have to implement eveything the final game will need. And recently, I thought about the “game over”. What happens when the player fails?

Well… This question is a lot trickier than it seems. Because when the player fails, the game must bring him/her back at some point where (s)he is OK.Thus… we must save this “some point where he is OK”. Hence a few questions come up:

Hence, those questions sum up in “when, what and how do I save?”

And there are some more-or-less inevitable links, for example: everywhen => everything, automatic => checkpoints, everything => slower and space eater, automatic => difficult crash recovery, …

So I considered using some kind of “old-school” save system: There will be checkpoints, and the player will manage saves him/herself. At the moment, I allow 5 save slots for testing purposes but this number will likely raise. Here are the main advantages:

While implemeting this system, I had lots of problems, especially with regard to the software design (I’m not that good in software design). I won’t detail everything here, but amongst other (this is a bit technical):

Well , that’s all for today! See you next time guys!