As promised in the last post, here is the demo of my “Speed Dev Week“. It’s called world of Ninjas. It’s a 2D top-down view stealth game, somewhere between “Commandos” and “Hotline Miami”, where you can create your own levels. 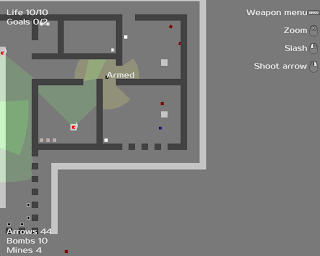 Don’t hesitate to check out the available levels to get an idea of the color use. Be careful, you need to use the exact color codes (R,G,B) described above.

Don’t hesitate to send me your levels if you achieve to create something cool :). May be I’ll add them to the next version of this game! And as usual, contact me for bugs or any feedback.

Thanks guys, and I hope you’ll enjoy it!
Peace 🙂

PS: My other game (World of Thieves) is still in progress, but I couldn’t finish the “eagle Island” level this month, so I won’t post an uncomplete level demo.