Hello everybody, I’ve been trying to create a first character lately (at least a character with a real appearance, and finest animations). There’s still a lot of work but here it is: 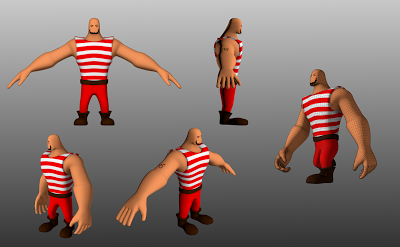 He’s some kind of big tough guy with a “Mom” tattoo. He doesn’t have a lot of “pirate” accessories (hat,  weapons, bird, …) so one cannot really tell if he’s a pirate or a sailor or just a badass, but this will be added in game. I also worked on various animations (walk, run, fall asleep, …). It’s really difficult to achieve something perfect, so at one point you have to stop even if you’re not fully satisfied.

For curious people, I posted a tutorial on how I created this guy on deviant art here: http://matou31.deviantart.com/art/Cartoon-pirate-tutorial-373913542

I worked a lot on this one, especially trying to find a graphical style that suits both my skills and the kind of universe I want to create. I think I worked on this one for a few days. But, if I had to create it from scratch now, knowing precisely what I want to achieve, it wouldn’t be that long. The real difficulty is finding the final look, not actually creating it. By the way, he may evolve a little bit, but I think characters will likely be based on simple colors and cartoonish shapes. It’s much easier to do given the time I have. For those who know, I aim at something like “Zelda Windwaker” graphical style, at least for characters.

You may notice that the first character I fully work on is not the player. This is because I’m not quite sure yet about the look I want for him. Of course I have many studies, but none is really OK at the moment. And furthermore, the player will always be on a screen, so I think I’ll wait a bit to have better skills in animating/modeling to create the player.

In addition to this first character, I also worked on a way to create levels in Blender that I can finely import in Unity. At the moment, I can fully model a level in blender and add logical items to it (ennemy, main character, path point) and I can get it in Unity with a little transformation script. 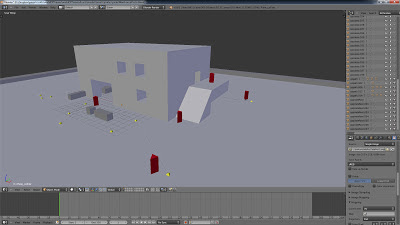 The level in Blender, with logical entities: red ones are “ennemies”, yellow ones are path points.
I export all this in an FBX file, and, in Unity, I run a script to replace all logical entities, based on naming conventions (not very pro, but truely efficient). Maybe I’ll talk more on this later, because the editor/conversion scripts are still in development. 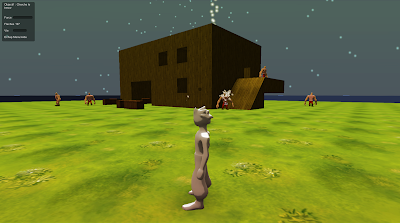 The in-game level. Every logical entity has been converted to the real mesh/texture/game object.
This enables me to quickly create a level prototype in Blender as I’m very familiar with its graphical interface. This way, I can test a level and see if it’s fun, or too easy, or too hard, and check that it can be finished. Or course, at the moment, my levels are graphically very poor, but decoration will come later. Functionnality first!
Okay, that’s all for today. I’ll try to post a demo by the end of the week with -hopefully- tutorials in it, as I had requests about these.
See you!
Subscribe by email to get all the news!