Sorry I didn’t have a lot of time after releasing the last demo, but now I can post a few explanations of my last month work. In this post, I focus on the creation of the hero home island, named Tera (for the moment at least).

I – Getting the idea

As usual the most difficult part is to get a clear idea of what the island looks like. That’s why, in the video game industry, some people focus only on this job: the designers. Very often, everything starts from a painting showing the major features of a landscape and the main mood. In my case, I only made a few doodles to get the basic idea. Once the bacic shapes are set up, everything else is polishing. 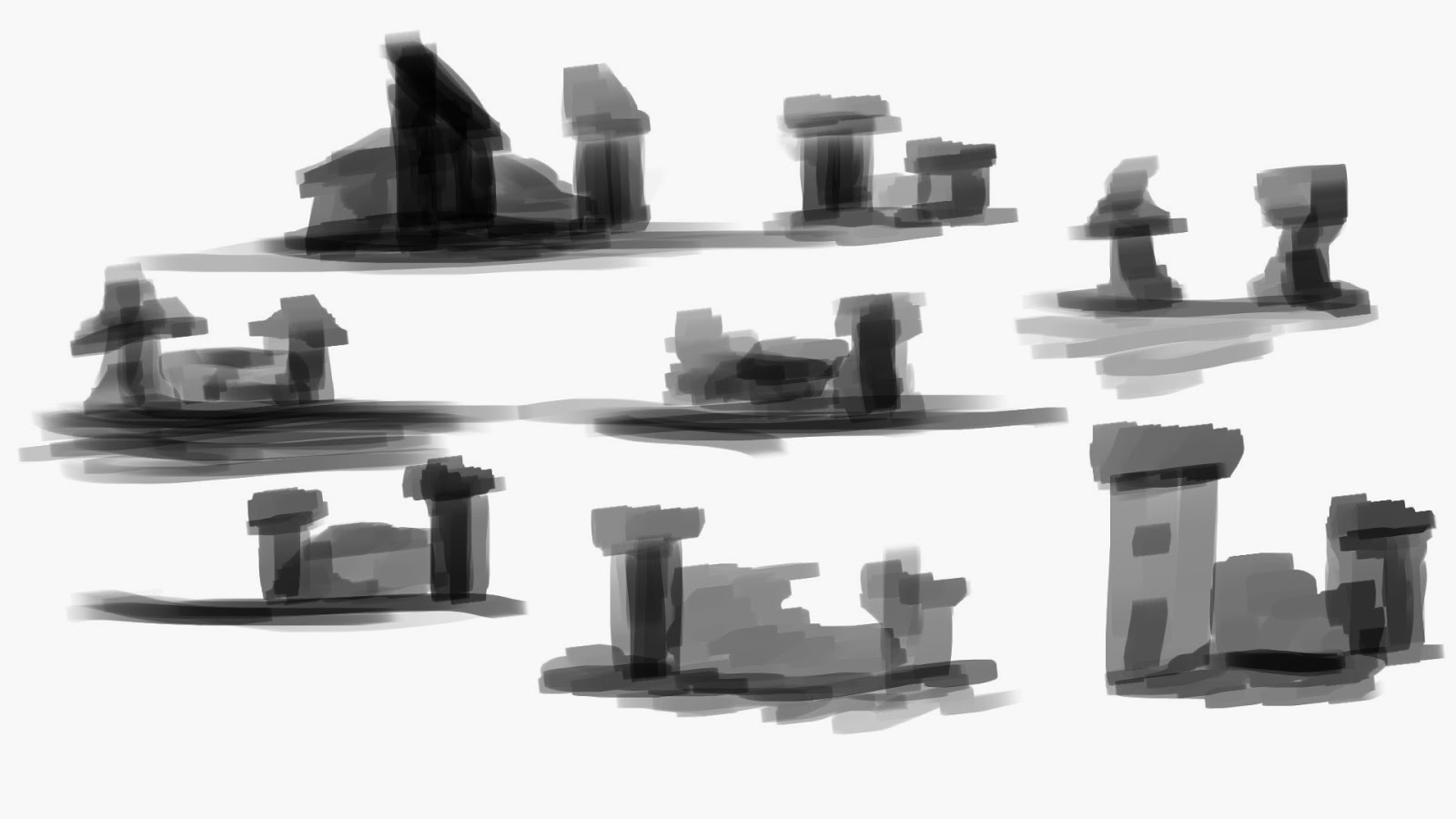 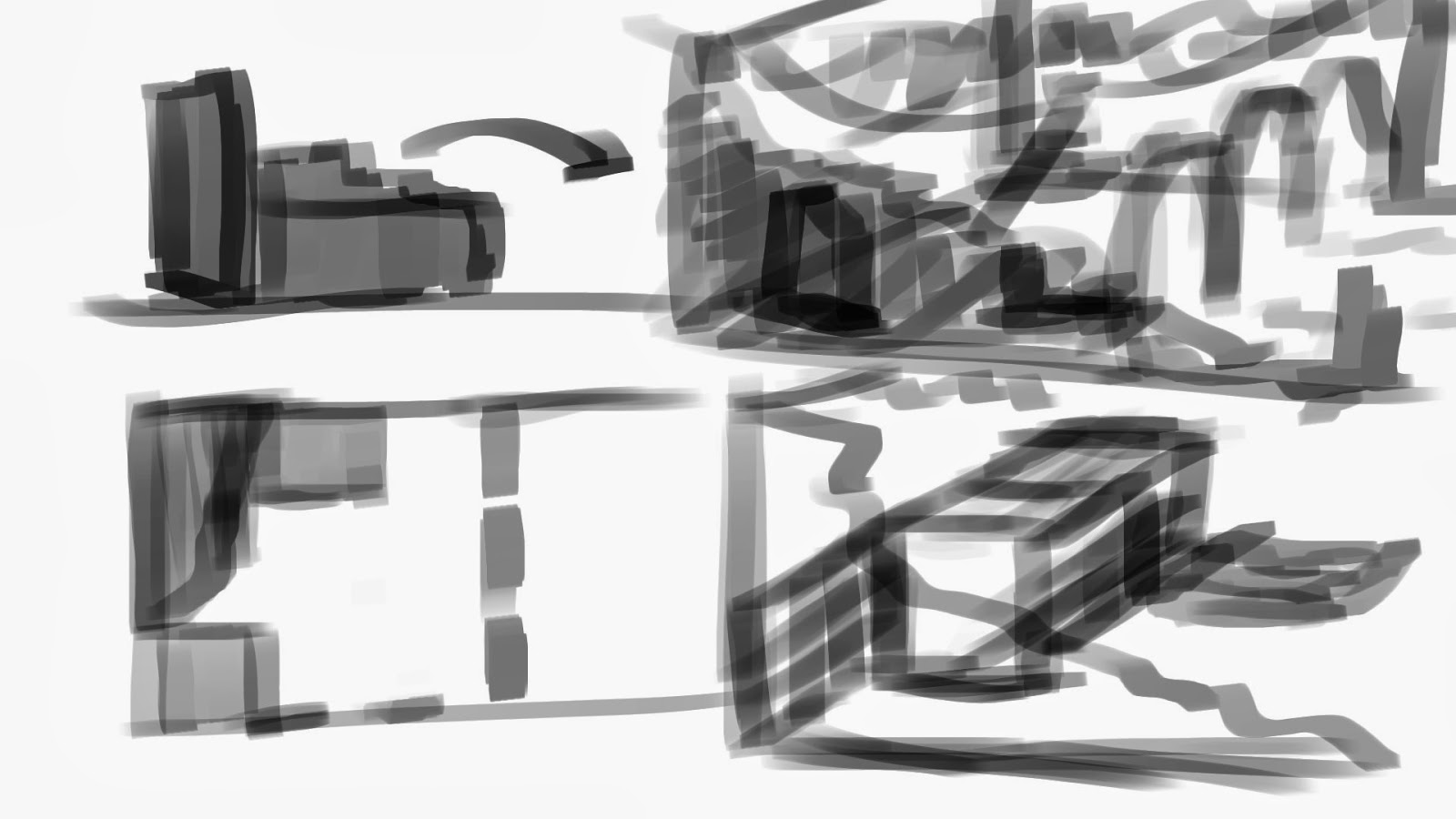 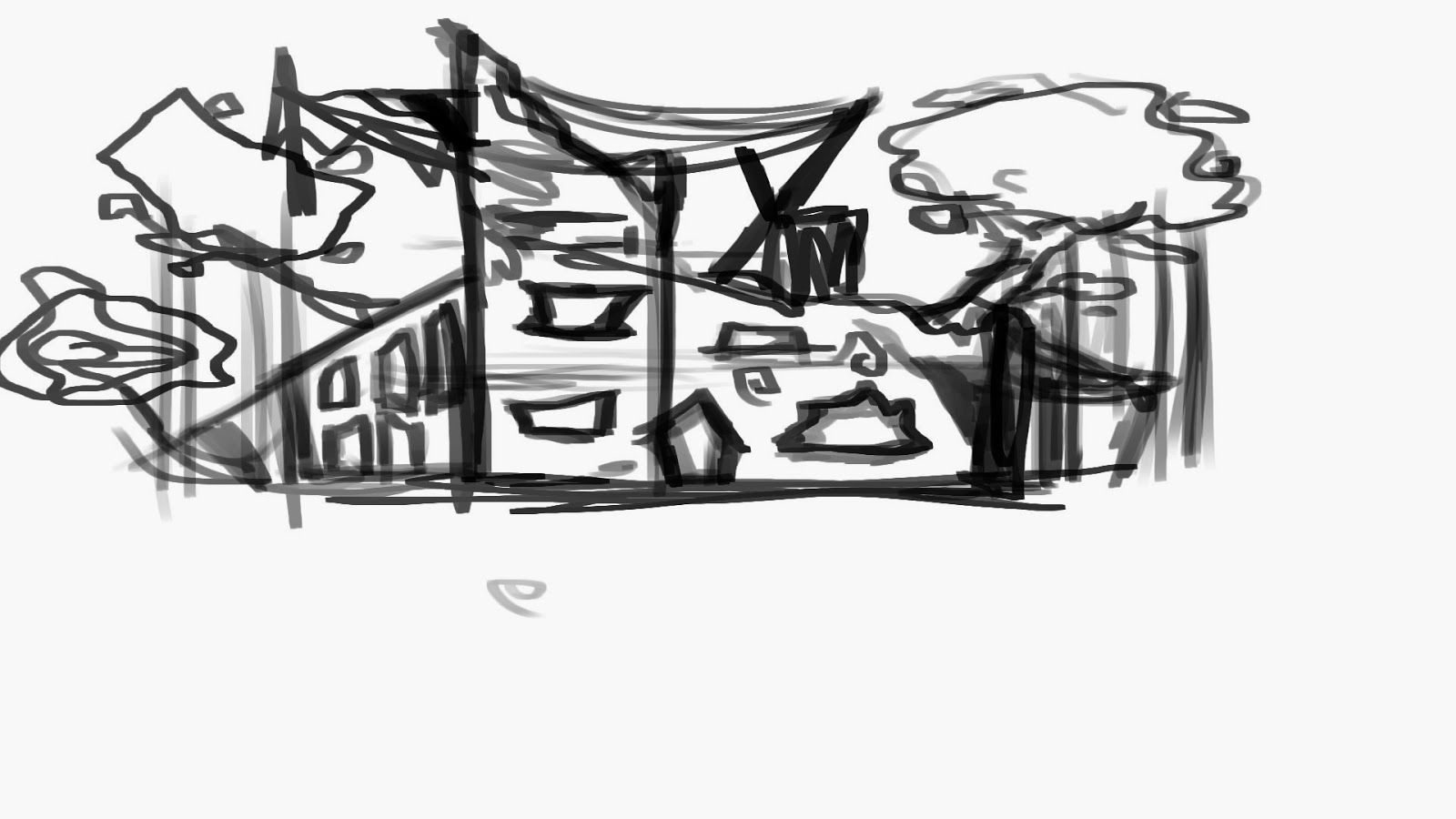 A few digital sketches laying down the main idea: a ruined/partially destroyed house. As you can see, all the sketches are not perfectly matching. I try many things and I keep only a few ones. 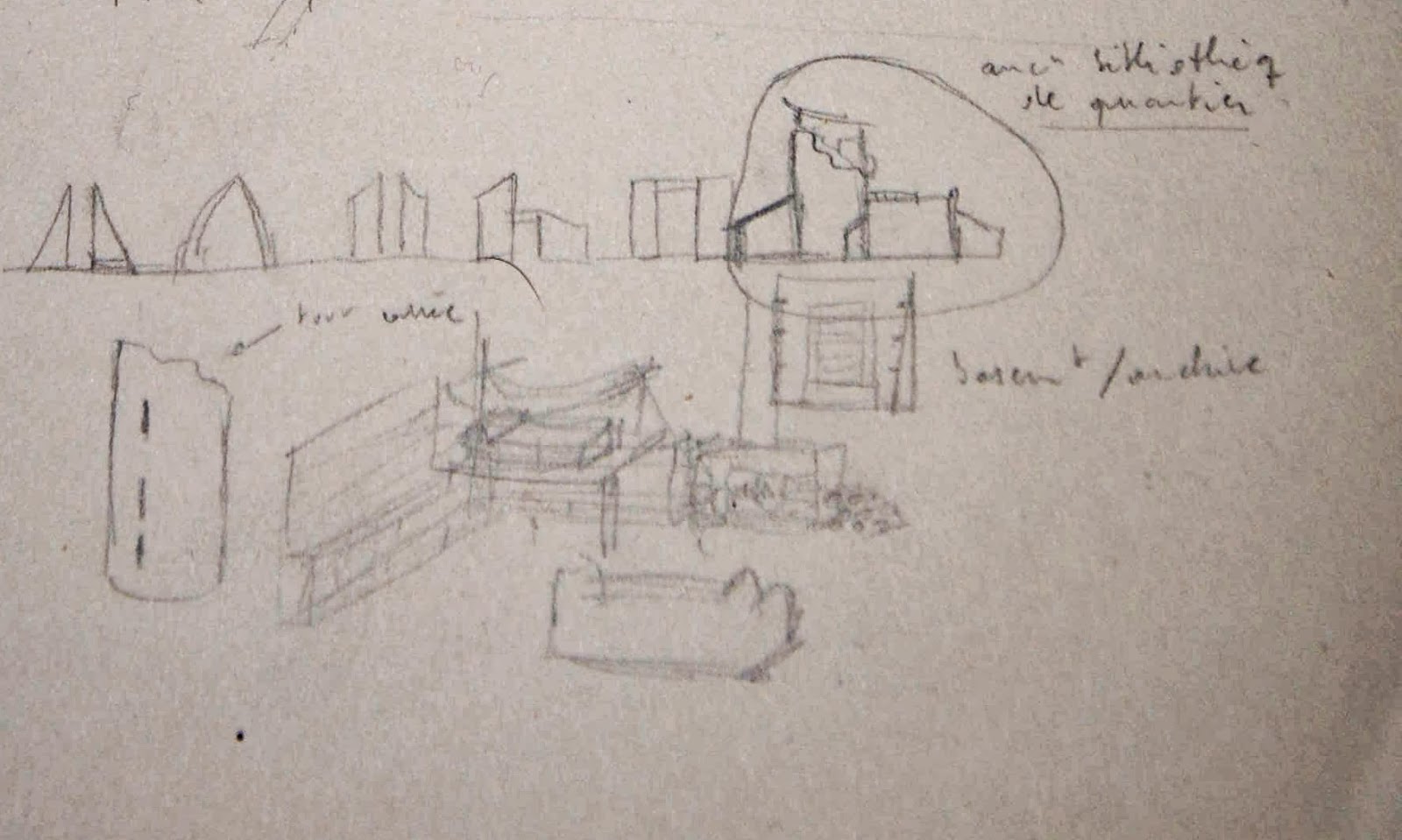 I also use traditional drawing. The nice thing about it is that I can draw anywhere on a moleskin if I’m not at home when having an idea.

So, after making all these sketches, I ended up with the hero home being a former library partially destroyed. I like the idea of a library because I can add many books leading to various side-quests. I also want the hero to share this shelter with other people who may help him. I’ll talk about that later.

Once the concept is done, I use Blender to create the full 3D model. There are 2 major works in here: 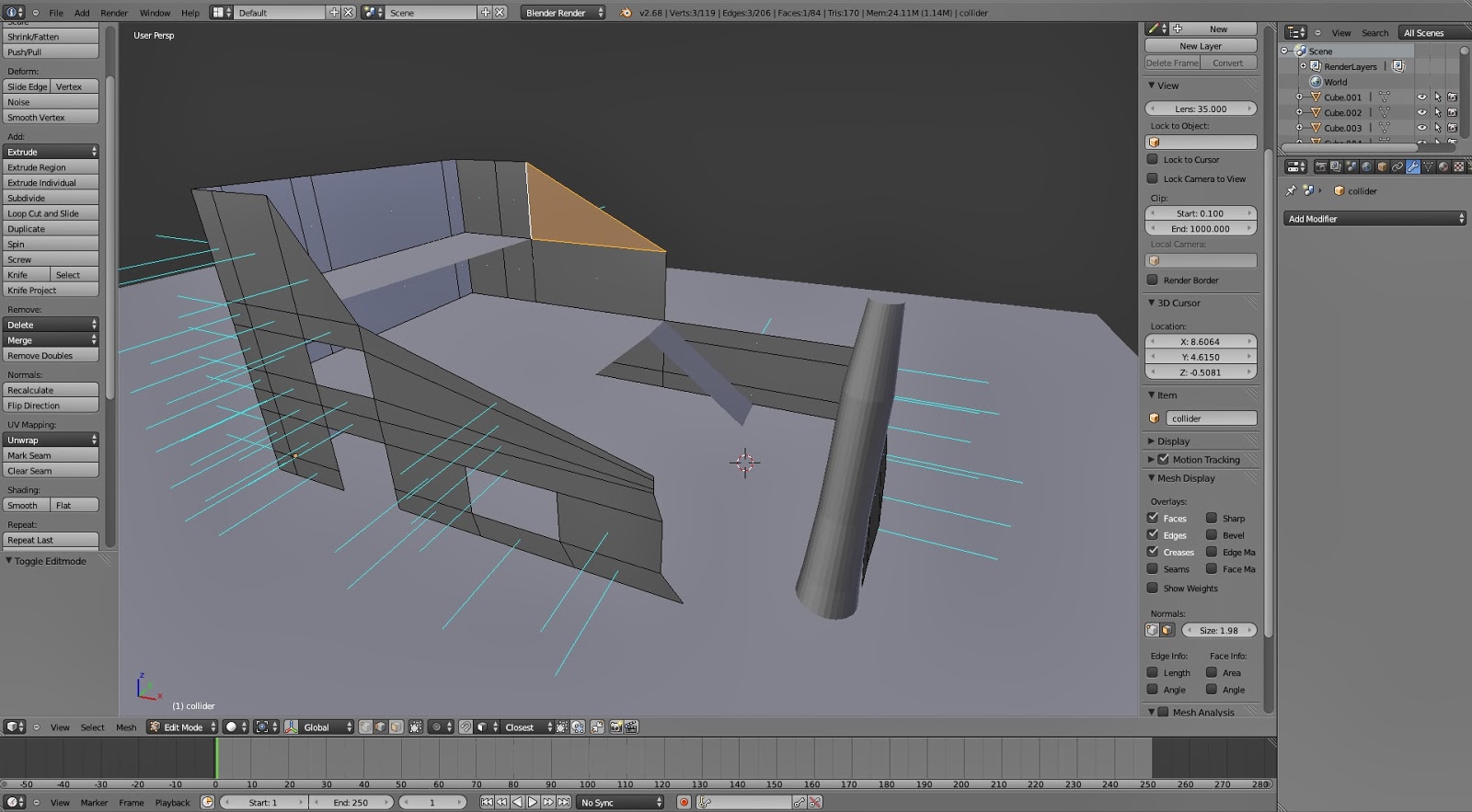 How the hero home looked after the first day. Not brilliant… 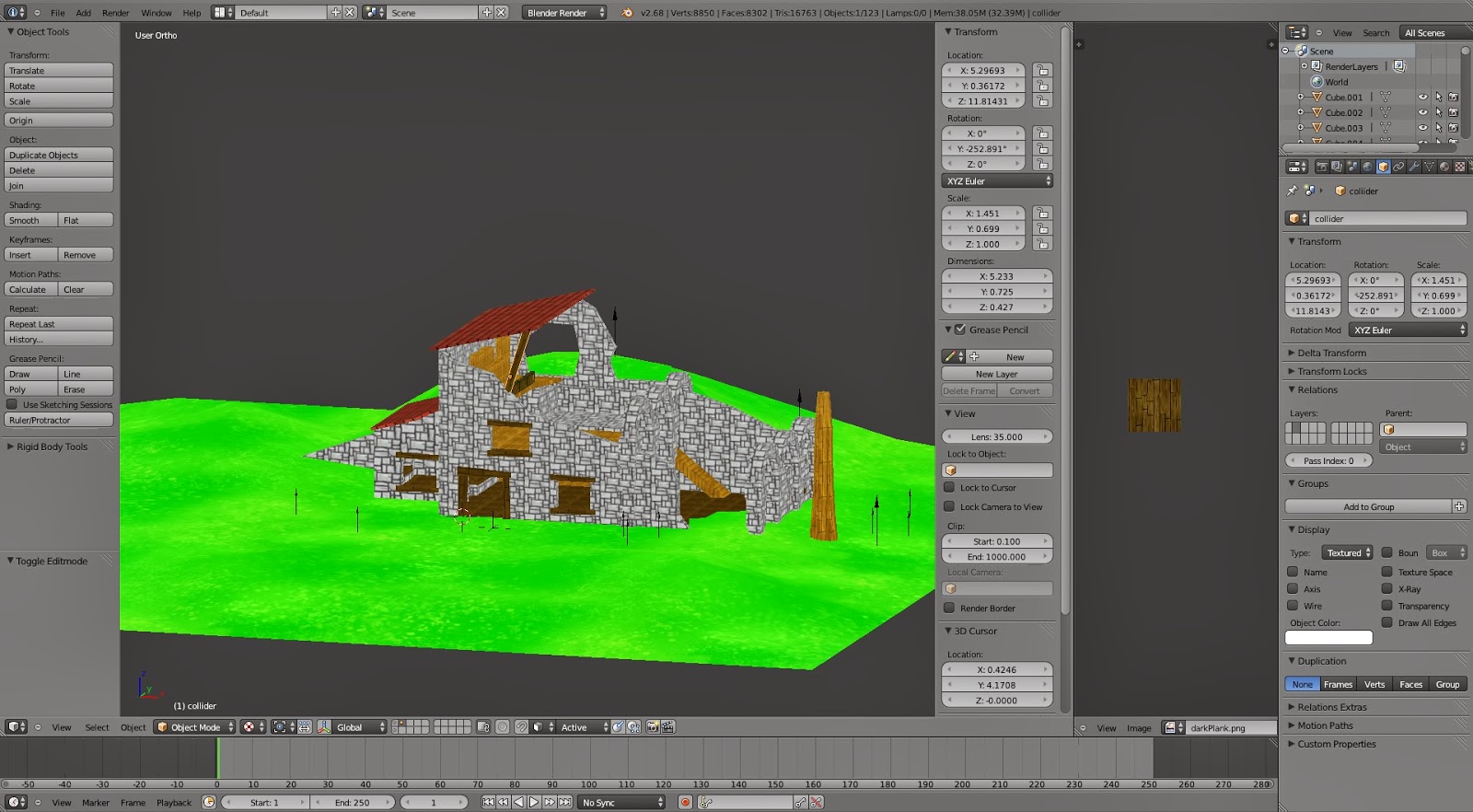 OK, it’s getting better, but there is still a lot of work!

The 2nd (“technical”) point is very tricky, because there are so many complex geometrical configurations that may arise from the artistic creation that I can’t assure the character will always behave correctly everywhere (the algorithms controlling the player moves are far from perfect). Of course, I make a lot of tests to check that every move is OK in cluttered places, and I have some technical guidelines for 3D modeling (avoid small walls, try to keep at least 1m between various stuff…), but this isn’t enough. That’s why testers are really helpful on this particular point! 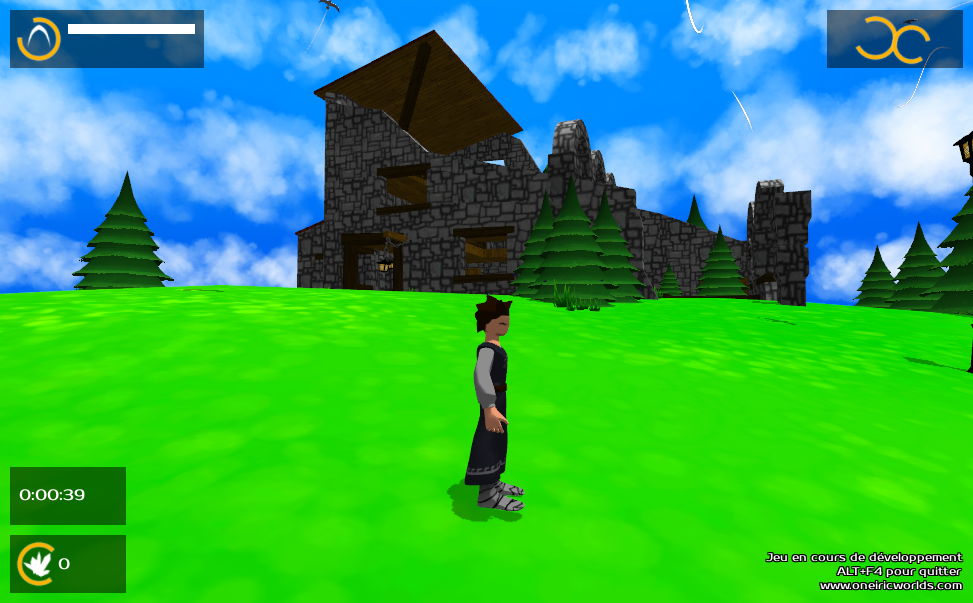 The actual look of the hero home (in game)

Furthermore, some items are interactive and may behave differently according to the player actions. And, of course, I must test especially the actions I wouldn’t think of, like what happens if the player attacks a wall while trying to jump near a swinging lantern? There are an infinite combination of such unlikely (but not impossible!) actions that it can’t possibly be all tested. Another huge burden about this technical part is that if I change (for example) the jump height of the character, I should theorically test again every place of every level already made.

At this point, I have something playable and not too harsh on the eye, but I should really add more items (jars, books, decoration here and there, etc…) and refine texturing and modeling to make the place more believable. 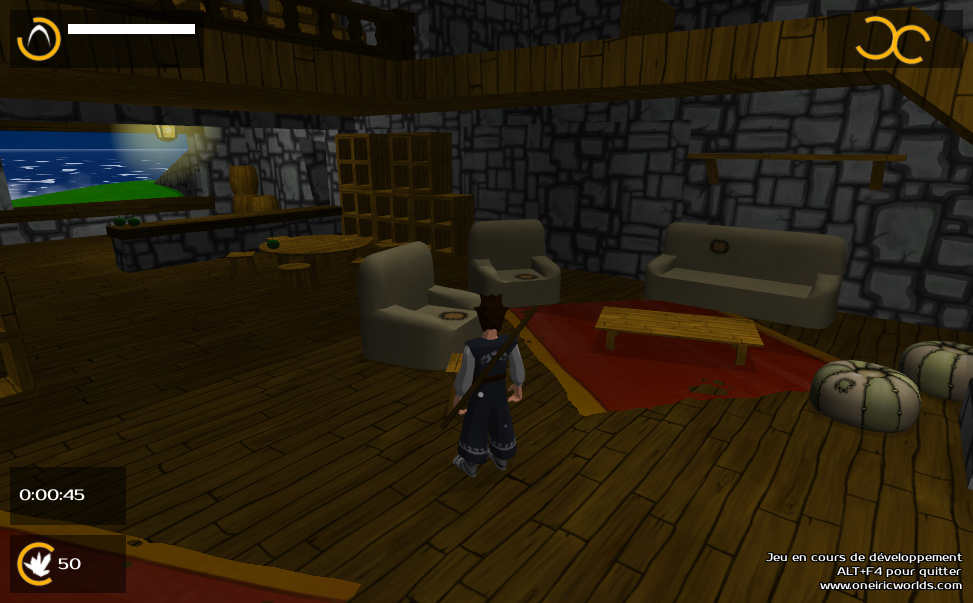 Carpets help to break the monotony of the wooden floor.

Once the place was created, I realised I didn’t think at all about the evolutions it could go through… According to the story, the game starts after a storm that broke the wooden pontoon joining the hero home to the main island of Tera. This is of course a gameplay trick to prevent the player to go to the main island where there will be side quests, and to force him to accept his first mission before going further. But once the first mission is complete, the pontoon should be fixed. This means that levels/decors are dynamically evolving according to the player actions.

To tackle this problem, I subdivised all levels in a “static” part and a few “dynamic” parts loaded only if the player accomplished some particular actions. 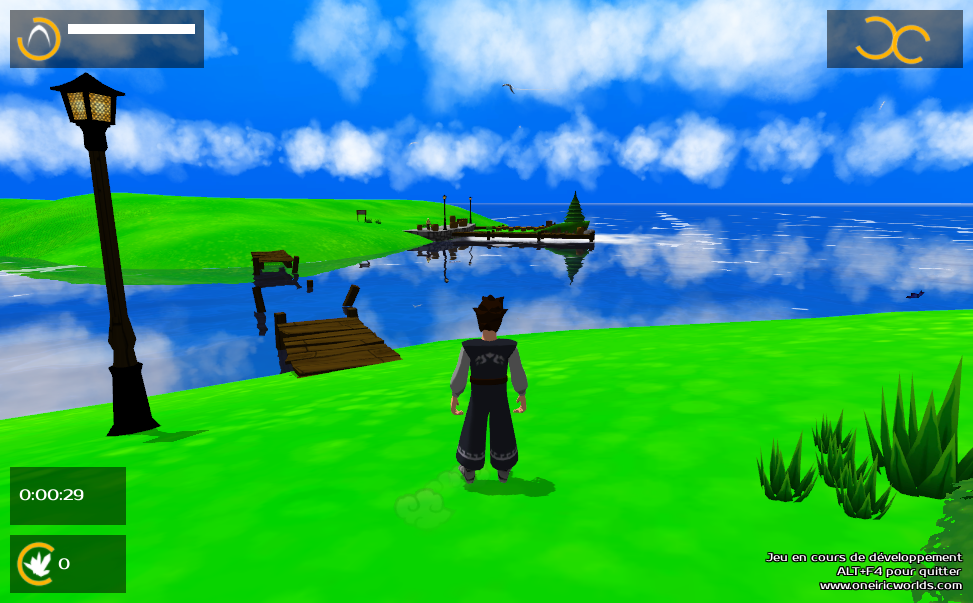 A broken pontoon, at the beginning of the game 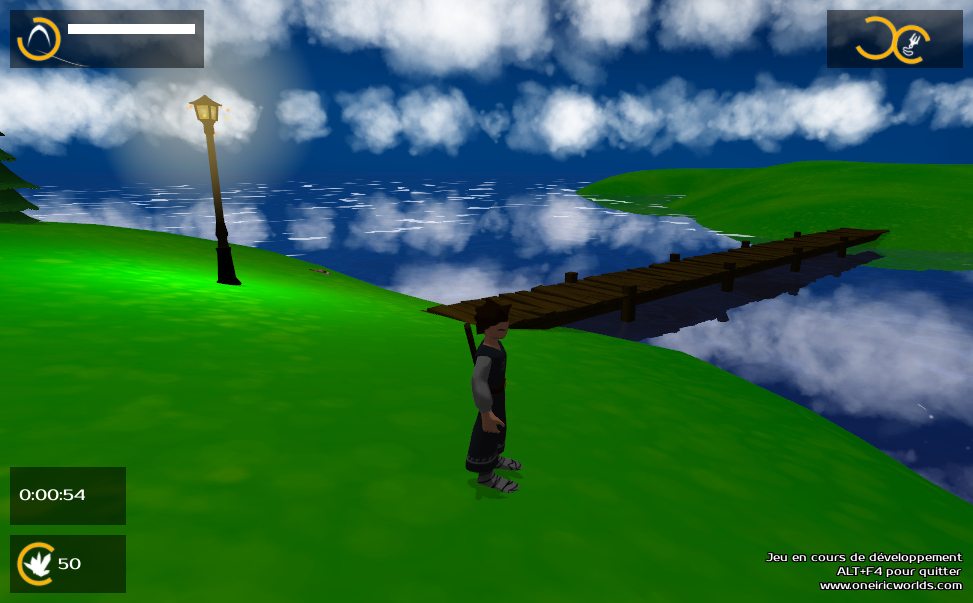 The fixed pontoon, after the first mission.

So that’s all for Tera Island. In the next post, I’ll talk about the new characters, and how I made them. By the way, thanks to anybody who tested the last demo, I got nice feedbacks, and a lot of things to correct! See you!