It’s been a while since I haven’t posted anything game-dev related. But, don’t worry, I won’t write a very technical article this time. I’ll just speak about a new content in the game: Aqualums, the main island (which is NOT the hero home, on which I still have to work by the way…)

So, for this new island, I had a precise idea in mind. I made some concept works using any tool I thought was good for the job: this included a textual description (in a text document), a color scheme and a logical/quest plan (in Inkscape), a digital concept art and a few traditional paper sketches. This is all very rough, but I wanted to have some kind of basis to set the mood. The goal is not to be perfect at this stage.

So here are a few snapshots of my base material (in French for the text, sorry): 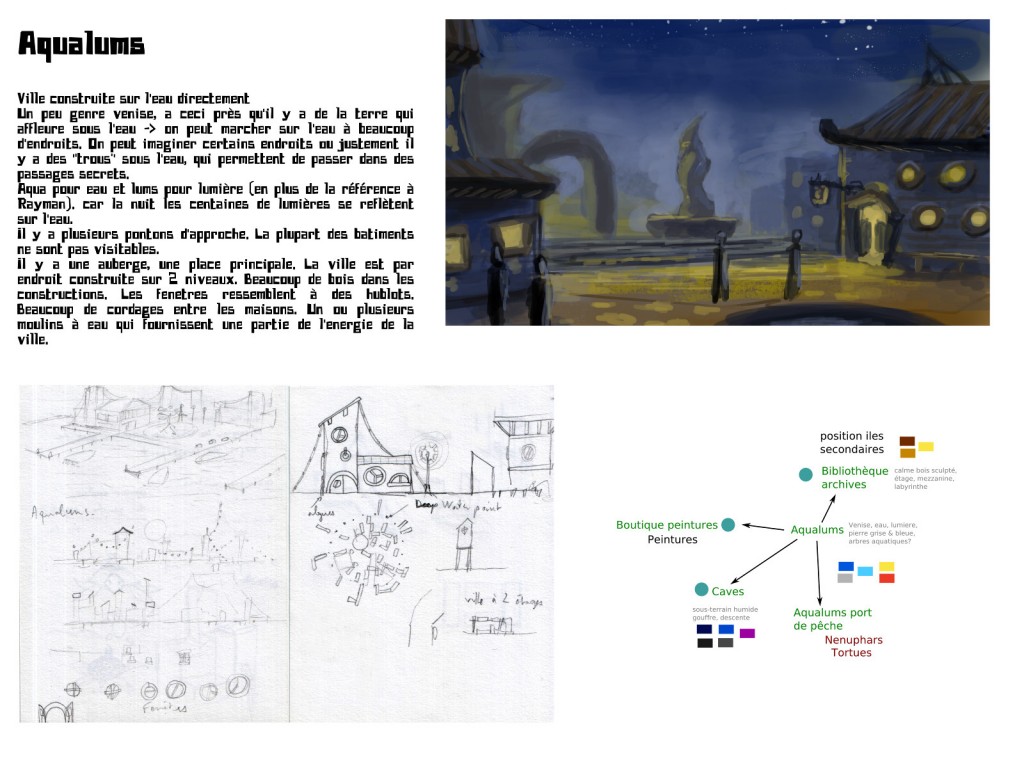 Of course, a real concept artist would be horrified by this… Everything is loose, perspective is off, and texts are full of mistakes. BUT, this gives me a good idea of the way I want to go. And I don’t have the time to make it better anyways :p.

So right after this, I jumped into the “blocking” phase: the goal is simply to create ugly 3D blocks to check the dimensions and proportions of the island. Not very pretty, but very useful to make the first tests in the game and “feel” the level.

Here’s how it looks in the game: 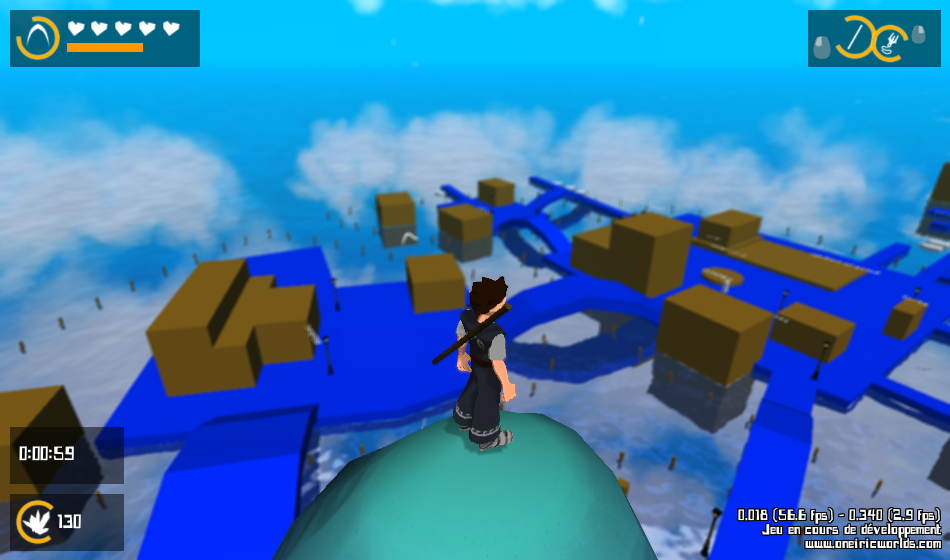 The block level. If you look carefully, you may spot 3D texts here and there. It’s just a hint (for me) to know what I’ll put there in the final graphics.

In this stage, I can also check the masses and forms of the buildings and see if there are mainly good visual compositions from the player point of view. The camera/player moves of course, but I just check that there aren’t any ugly/unbalanced spots. I also tried to avoid a too square-y plan of the city.

And once everything seems OK, I start to create the final graphics, using textures, and finer 3D modelisation: 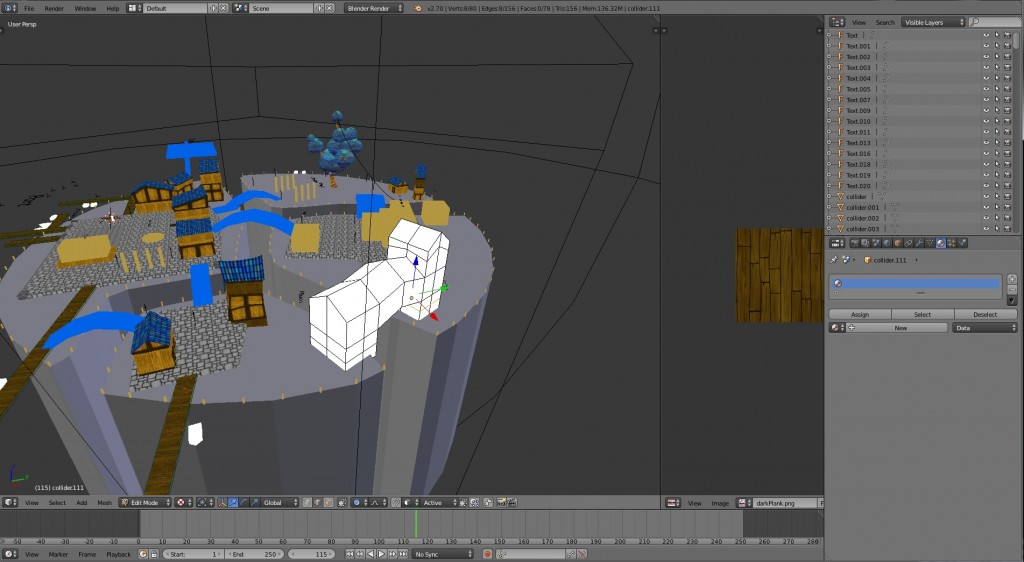 The island during the refining step: some blocks are still there, but I slowly replace them by cartoonish houses (with no windows at this point)

This process is very long! And lucky for me, I already had a lot of wood and stone textures as well as nice wood pontoons from the previous levels. Of course, I reused some of the items, but not all of them! I don’t want this island to have the same look as the other ones. So I also had to create new items: bridges, carpets, a tree, small boats, paper lanterns… There are currently 1300 objets in this level… for now.

The thing is, creating a graphical appearance is good, but this is not enough for a game. I must specify other properties for some of the elements in there: Is it solid? Can the hero collide with it? Does it move? If yes, how?

And some elements have a complex appearance/rendering stage (the tree for example), so, in the end, I also had to code additionnal stuff to create a believable city in the game: flying leaves around the tree, occasional halo around swinging lanterns, and of course, I had to optimize everything to make it run smoothly enough. Because, I’ll have to add characters on top of that. 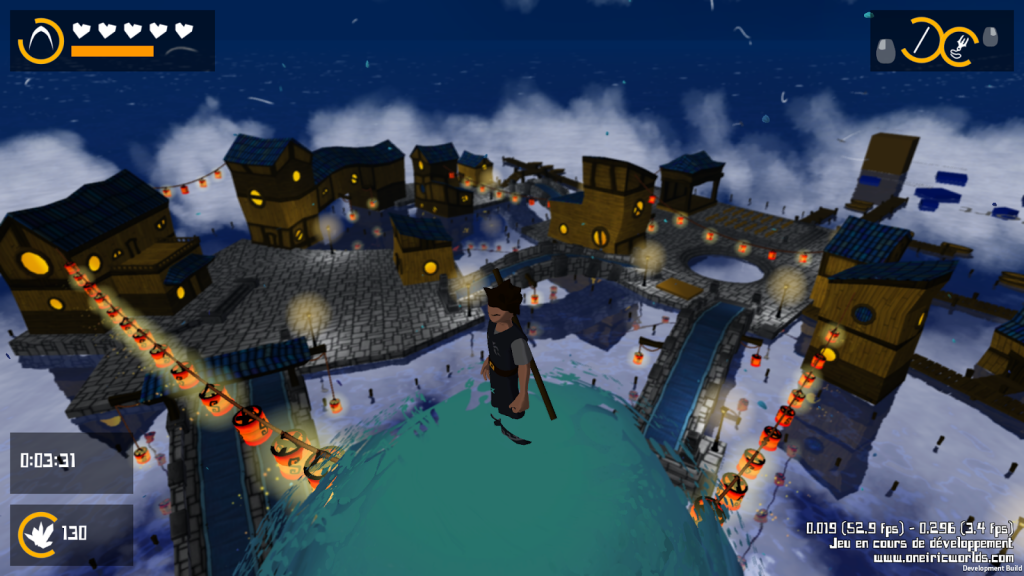 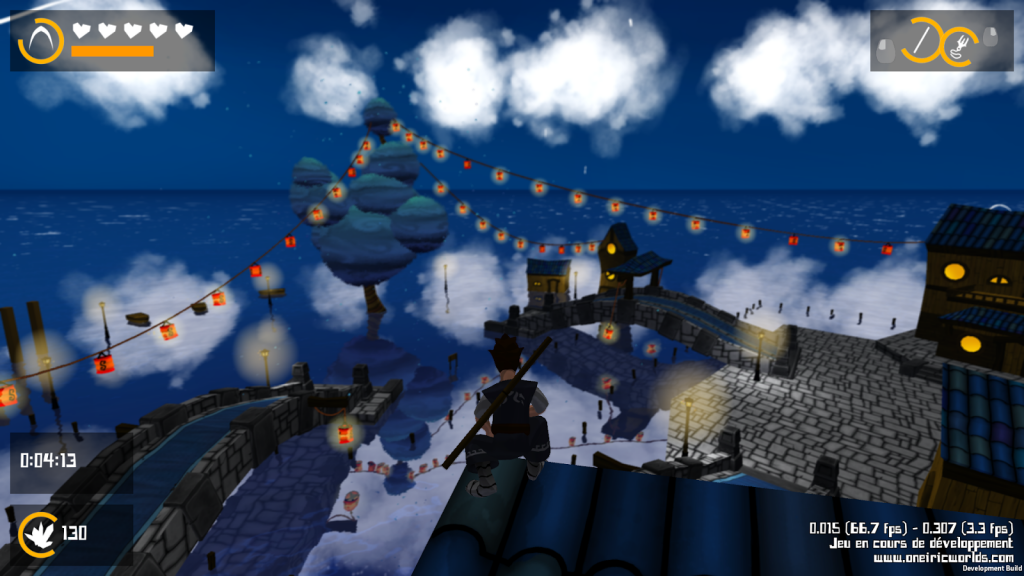 Soooo finally, this took me nearly a week of work (I only talk about blocking and finalizing; concepts were done long before and went through a lot of changes). But, at this point, you can’t do anything in this city, except walk/climb around. And you can’t go inside any of the buildings. Useless, isn’t it?

In addition to this new island, I also worked on various stuff, including (but not limited to): 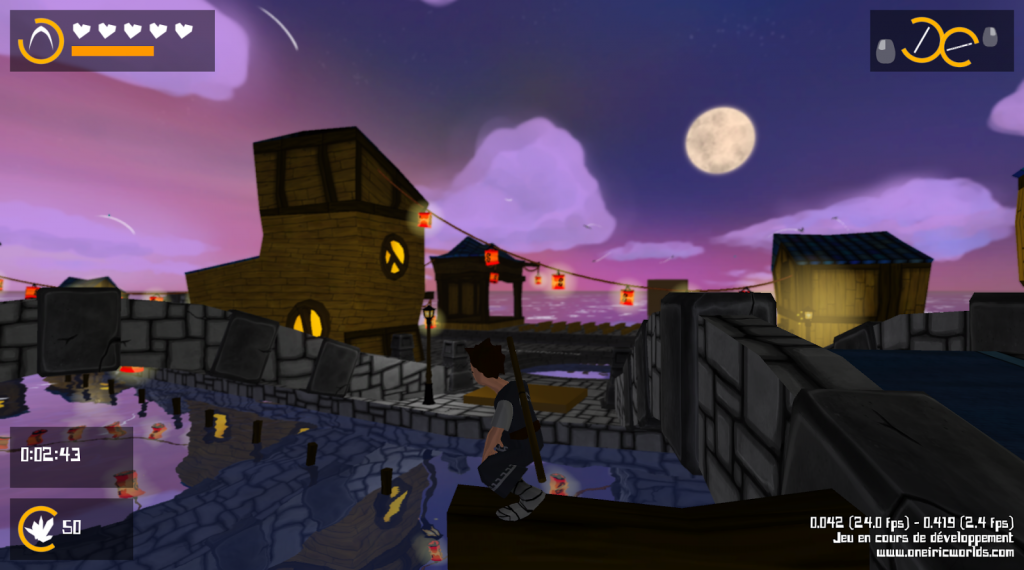 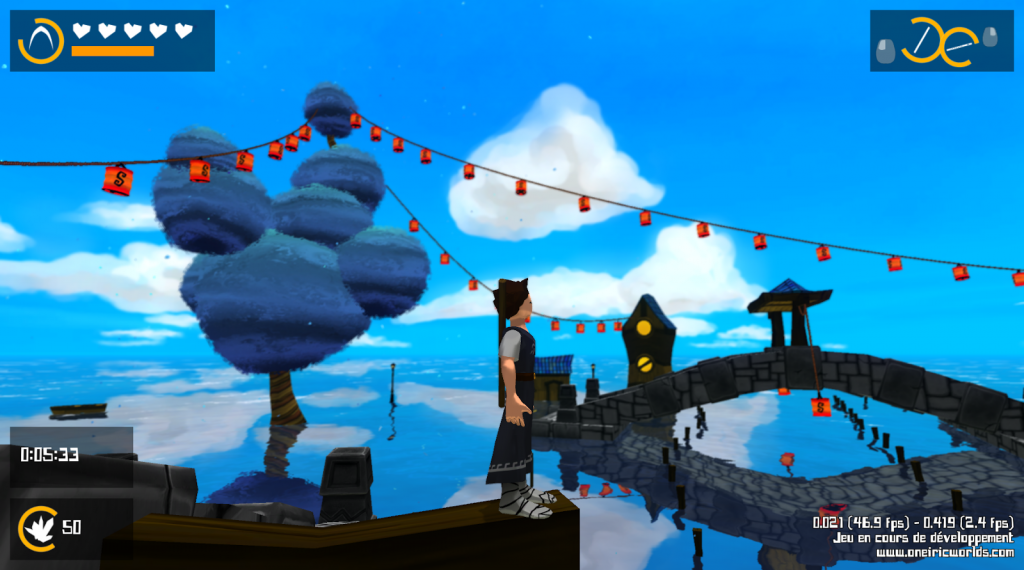 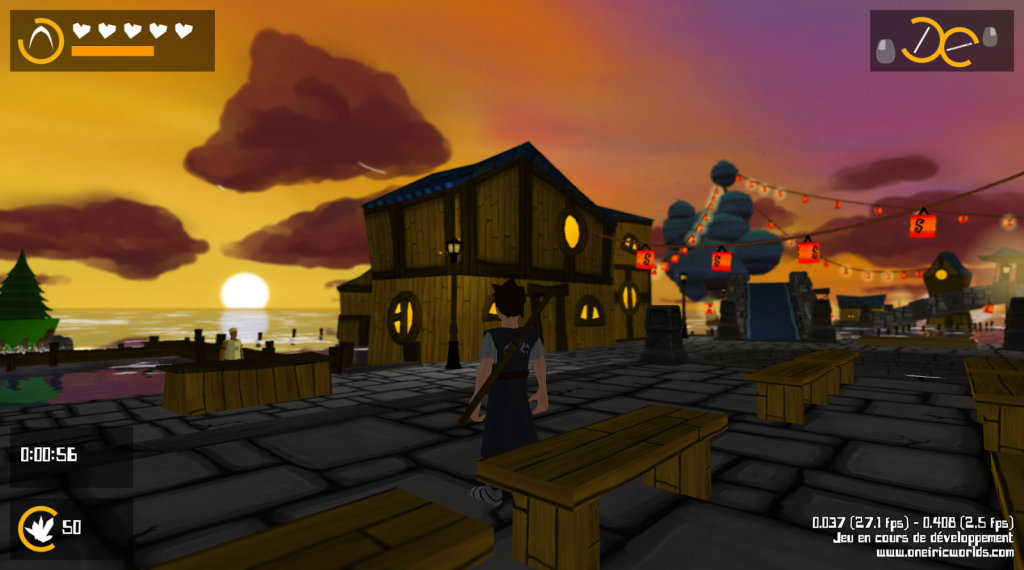 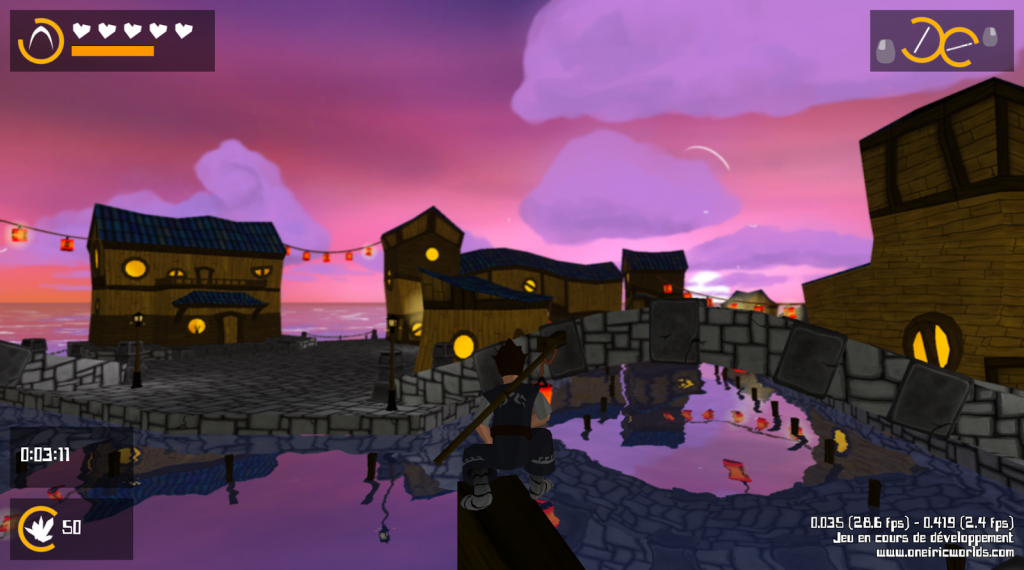 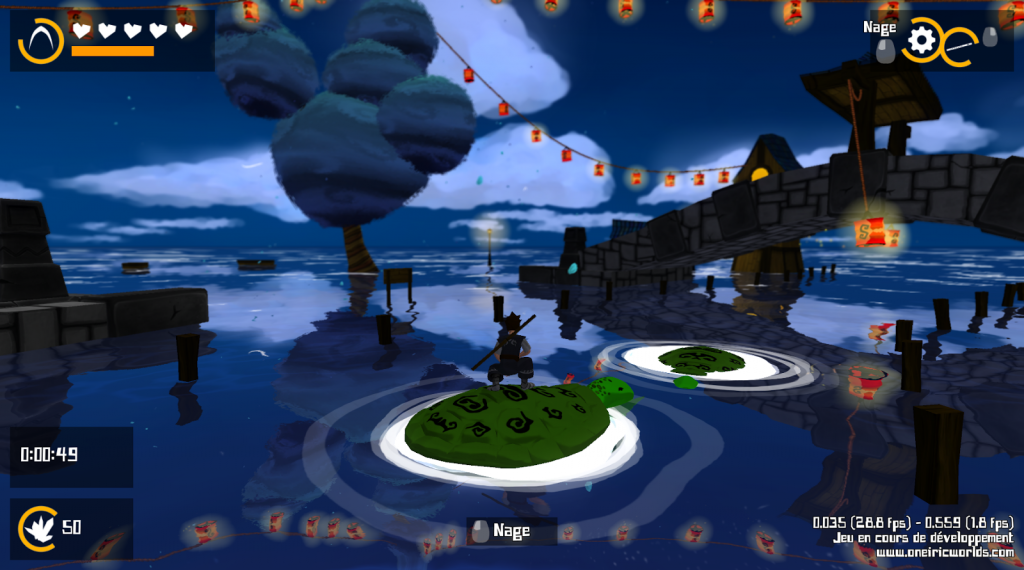 Yes you can ride a turtle in the canals of the city.

In the end, it’s kinda cool to see that I started with a simple text paragraph describing the city and it’s finally taking shape! But the work is not finished yet…

So that’s all for today!
Peace 🙂