This week, I worked on putting together the first level of the game. Beware, spoilers below 🙂
As usual, I’ll try to explain what my goal and constraints are… So I hope you don’t mind if I get chatty 🙂

OK! First, I must think about a simple goal for this first level that may fit within the universe/world, the global story (because yes, there is a global story), and my guidelines (humour, freedom, oneiric). 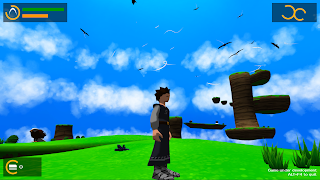 A glimpse at the first level.

This is the very beginning of the game, and the player doesn’t have a lot of skills at the moment. This level will more or less be a tutorial, but without instructions, just to see if he got all the basic moves, and if he’s able to combine them in new ways. At this point, the moves are mainly platformer-like (no fight yet, but this will come 😉 ).

The goal in this first level will be to use the thief skills of our hero to get an egg on the Eagle Islands. The Zoological Institute has watched this place over the past weeks and has noticed that one egg is not brooded anymore, maybe the mother eagle disappeared. The goal is to get this abandonned egg  and bring it back so that the Institute can take care of it. However the place is not easy to approach because of all the brooding eagles.

So in this setup, we’ve got platformer components with floating islands, stone walls, jumps to make, rocks to climb and the first lively ennemy: eagles. Eagles can add a good value to the oneiric feel :). They are just peaceful beasts, but don’t get too close to their eggs!

This is actually not that complicated. A few cubes here and there, and let’s see if it forces the player to practice all the basic moves he’s been taught, and a few more that he will have to imagine. The most important thing to test is that there is no hack to avoid those particular move combinations. 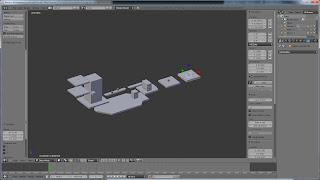 A simple level (logical) prototype in Blender: pretty much only cubes…
OK prototyping is always quick and fun… But creating the real graphics is a lot more time-consuming… Once basic forms / hierarchy of the level are OK, I have to create every island, and vegetation spot on it. 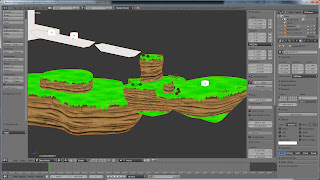 Sloooooowly creating the real graphics in Blender… I don’t detail every stage here, maybe on a later post. V – Steven the Eagle (yes, this pun seems to work with all bird names)

Creating the first lively enemy has been a great challenge… I started with the model of the seagull that I corrected to make it look like an eagle. Of course, I kept the few flying animations to add flying eagles around the level. But the BIG difference with the seagull is that I want it to be on the ground too. And I was a bit unaware of the difficulty to make an animation of a bird folding/unfolding its wings. It’s such a mess! See for yourself: 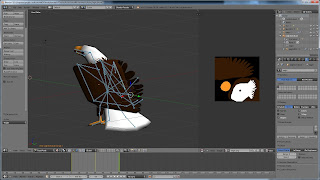 The eagle with folded wings (after one full morning of work… Just to finely position the bones) … You can see the skeleton in blue. This was a real challenge to smoothly deform the 3D model without creating too much artifacts on the high-torsion zones… I had to catch up a few zoological anatomy classes in order to create a believable wing deformation 😉 Believe it or not, a bird wing and a human arm are not that different.

And then I had to add some “logic” to its behaviour. I want it to be an obstacle to the player, but the player has to be able to find a way around it without using any fight skills (he doesn’t have any at the moment). I won’t detail here the tricks I used to design this eagle enemy (how to make the player understand there is a danger? How to make him understand how to counter it? Do I help him a lot? Not at all? What is the sanction?), but you’ll see the final result in the next demo (surely at the end of the month). 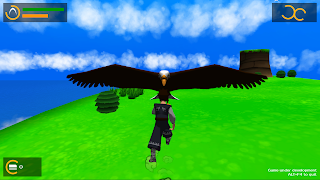 Don’t upset him! Or you’ll regret it… Can you believe it? He can spread his wings! Yay!

Wow! I’ve written a lot, and I didn’t speak of everything yet (adding some pickable items,  tracking bugs, adding a few sounds, adding variety to the look of the eagles, including an albinos one… for a secondary quest). Well I guess that will be for another post 🙂