Once again, it’s been a long time since the last post. But I’ve been working on many things lately, including (but not limited to):

Beware, this post is quite long and a bit technical!

I – A new saving system? Why? What’s the point?

The goal of setting up a new save system is to get rid of the old-school “save points” where the player must save at specific places and times. This breaks the flow of the game, and furthermore, the player might forget to save and then might lose its progression within the game, which could be very annoying.
Until now, it was this kind of system that was set up, mainly because it was easier to design and I didn’t really have the time to propose something else.

But, nowadays, in recent videogames, saves are really almost automatic, and the player might not even notice that the game is saving (very often a little icon appears in a corner of the screen to tell you that the game is being saved). This is what I want for my game, but it rises many questions about design, software architecture and real-time performances.

The little gear icon on the lower left corner indicates that the game is being saved.

II – How should it work?

Usually, before coding stuff, I try to think about how it should work in different cases (this is more or less a “use-case” approach). Here are a few important points:

Of course, every time I’m saving the game, I don’t want the player to notice any lag in the game. But, sadly, when working with files on a hard drive, things happen quite slowly (in comparison, say, to how many frames a graphic card can handle per seconds). Therefore, I must use threads so that the saved game can be written on the disk “in the background” while the game still runs smoothly (hopefully).

Until now, I had a simple class/structure mainly based on .NET dictionaries to save every important aspects of the game:

The idea was to NOT save the whole state of the game, but rather what is TRULY necessary to reload the game, which should result in light-weight saves, and fastest loading times.

Of course, all this info must be accessible from anywhere at anytime, that’s why I use some kind of Singleton class to store them (well it’s not that simple, but that’s the basic idea).

So, now that that we know WHAT I should save, let’s see HOW I can save it. To answer all the problems and objectives listed in II, I chose to have:

The idea is to have many layers of saved games, each one communicating ONLY with the layers immediately above or below, depending on their main purpose and on their speed.

The real-time game engine always works with the LEVEL 2 save. This one is unique. From time to time, and when conditions are OK (the player is not fighting, he’s in a safe zone, he’s not in a “save forbidden zone”, …), I make a full copy into one of the current LEVEL 1 slots. And then, if the game is not already writing on the disk, and conditions are OK (last save has been done more than X minutes ago), I copy the LEVEL 1 save data on a file on the disk (LEVEL 0). The data is saved on the disk via basic .NET binary serializers.

Of course, with this system, it’s also possible to save at specific points (when the player quits, finishes a quest, opens a menu, etc..). It’s quite permissive actually.

For now, I’ve only talked about the saving process here, because it’s the most complicated one. The loading process is quite straight-forward; it consists in reading all the LEVEL 0 slots on the hard drive and populating the LEVEL 1 slots with the data during the game launch. When the player loads a slot, I copy the LEVEL 1 data to the LEVEL 2 data and load the corresponding level in Unity.

You might wonder if this is not too heavy in memory, but each save slot should be only a few 10 000 entries of string data. With a quick computation, this results in a few 100 KB in memory for each save. My biggest tests with hard drive data size led me to maximum 2 MB, which is quite OK I think. 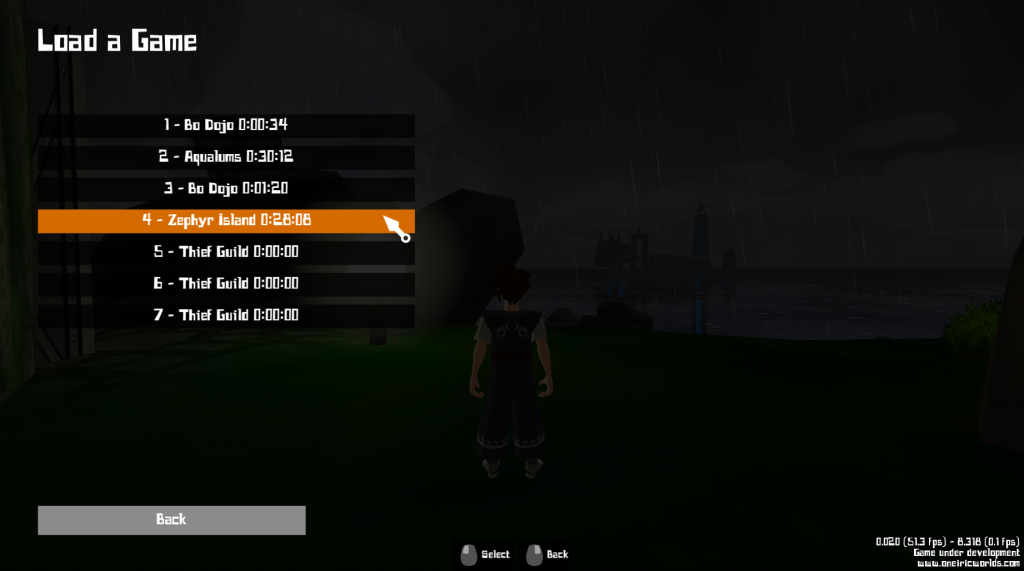 You might have already spotted it, the writing on the hard drive is slow. So copying LEVEL 1 saves to LEVEL 0 is slow. But that’s OK, because I designed it as a threaded process and it doesn’t freeze the game. During this process, I display the little “gears” icon in the lower left corner on the screen to tell the player that the game is being saved. At the beginning of the game you will barely notice it, because it’s really fast (and there’s almost nothing to save). However, Unity is not thread safe, which means I can’t access any Transform or MonoBehavior info. So I had to carefully design saved data to avoid using unity types and functions.

But another problem is copying data from LEVEL 2 to LEVEL 1: this MUST be a DEEP copy of the data, because otherwise, we could still have the same problem of concurrent access (due to the class type of many C# variables; this is pretty not intuitive to grasp so don’t hesitate to google it if you want to learn more about it). Sadly, deep copies are slow, and these ones can’t be threaded (well at least not very easily) because I copy from the LEVEL 2 data which is “alive”! It starts to get noticeable around 20 000 entries for my dictionaries, which might be OK for the whole game, but I’m not sure yet. I have to do additional tests.

However, if the future tests reveal that this LEVEL 2 to LEVEL 1 copy is too slow, I might have another workaround in mind, which I won’t detail here because this article is already too long.

So now, I hope you have a good overview of the saving system in my game. I know it’s not perfect, and I know it will break the game during the near future because it hasn’t been tested enough, but it’s really nice to be able NOT to think about it when you play. The experience is much more immersive.

A few potential problems are still there:

So finally, I have quite an operational new saving system for the upcoming Toulouse Game Show this week end, which was my main objective. By the way, don’t hesitate to come and meet me there if you want!

I hope this article was not too heavy or technical or boring, but … I doubt it 🙂 Hopefully it might help somebody out there.